The Tana; Heroes and Hippos

The Tana; Heroes and Hippos 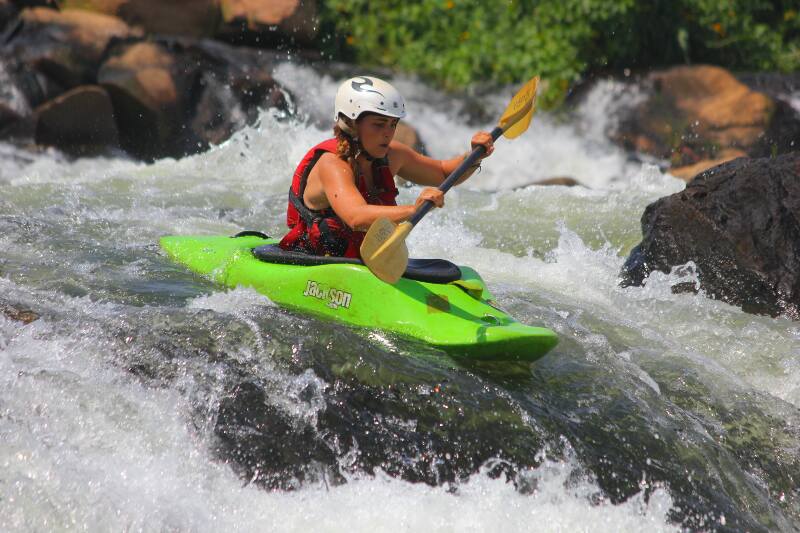 None of us ever thought that day would bring what it did, the dark murky water of the Tana beneath our boats would give us an experience that would change our lives…

I was joined that day by one of the local Kenyan paddlers, Wilson. We had paddled the 7 km section leading back to Savage camp, with joy and laughter throughout.

I was 19 and had only had been paddling for about 7 months. Wilson was fairly new to paddling too. He came from a childhood where most communities feared the big water of the Tana River. They feared drowning and being attacked by hippos and crocodiles, and most families warned their children of the dangers the river had.

Wilson, along with a few others, ‘lived on the edge’ as the locals here may say. The fact that they would even consider entering the river and then sit in a boat and paddle the ‘violently rough water’ was seen as mad, however it was respected. They were doing what people have said was suicidal for decades, they were risking their lives in doing something they found a thrill for. When someone does what others see as impossible they are encouraged here, and thanks to these men and women they have encouraged locals to trust the river and to see it’s beauty as opposed to its dangers.

We began practising our rolling in a reasonably calm pool about 200m from the get out, when Wilson decided to go for a swim and relax in the water. I rolled back up with a sick feeling in my stomach when I saw her. A huge hippo lurched herself out of the water and pulled Wilson under my boat. I couldn’t see him for 3seconds, which felt like hours had passed, and when he finally emerged he grabbed my boat, pulling me under. I quickly rolled back up and calmed him down as fast as I could while trying to get him to swim to the side, with the hippo somewhere beneath my boat. He managed to swim to the side and get out. I paddled as hard as I could to the get out where I was able to run along the bank to find Wilson.

The hippo had taken a huge chunk out of his side… It was now a race against time, the owner of the camp piled him into his car and rushed him to Nairobi hospital which was an hour and a half away.

After a painful surgery and a number of skin grafts Wilson was able to tell the tale… He is now called ‘The Hippo Man’.

The community was told about the incident and the nerves and terror of the water was reemphasized. Wilson had almost lost his life, and I was nervous to ask if he would ever sit in a boat again. It was not until 3 months later (after a full recovery) when he called me and asked if we could go kayaking again.

The community questioned why he would continue work on the river and to be honest I never did ask him why he didn’t just stop paddling after such a close encounter with death. What I do know is not everything is going to ever be easy no matter what it is. There is danger in every corner of our lives, although some may argue outdoor sports makes danger far more enhanced, but for so many of us we love the freedom that sport, or whatever your thing is, gives us. It’s a moment in time when it feels like the clock has stopped and you are living the best moment of your life, when nothing else matters just that next drop, or just that perfect boof to make the best line.

Wilson still kayaks and so do I. And yes I think about that hippo attack nearly every time i’m on the river, no matter which river it may be, but these are experiences that I have learnt from and respect in my life.

But what did I learn from that day? I learnt that it doesn’t matter how hard it gets out here, I’ll stand by those im with and to continue doing what I love to do no matter what the world may throw at me.

The Kenyan community saw a hero that day. A man survived a hippo attack but never gave up his love for the river. He inspired young men and women to just keep doing what they loved even when everyone doesn’t believe you have the strength to do it, and no matter the poverty if you love what you do then you will persevere through it all.

Living here as a child I saw poverty on my doorstep every day, yet there have been incredible and inspiring stories of people building a life for themselves with nothing to their name when they start and to me those are the real heroes of the world. If you believe in yourself and persevere even when you have no-one and nothing, you are only destined for success. It’s experiences in life that will make us stronger and push ourselves further.

Ella was born and raised in Kenya and has seen paddlesports grow in the country. She now splits her time between Kenya and Scotland, where she works as an Adventure Sports Coach and Guide.