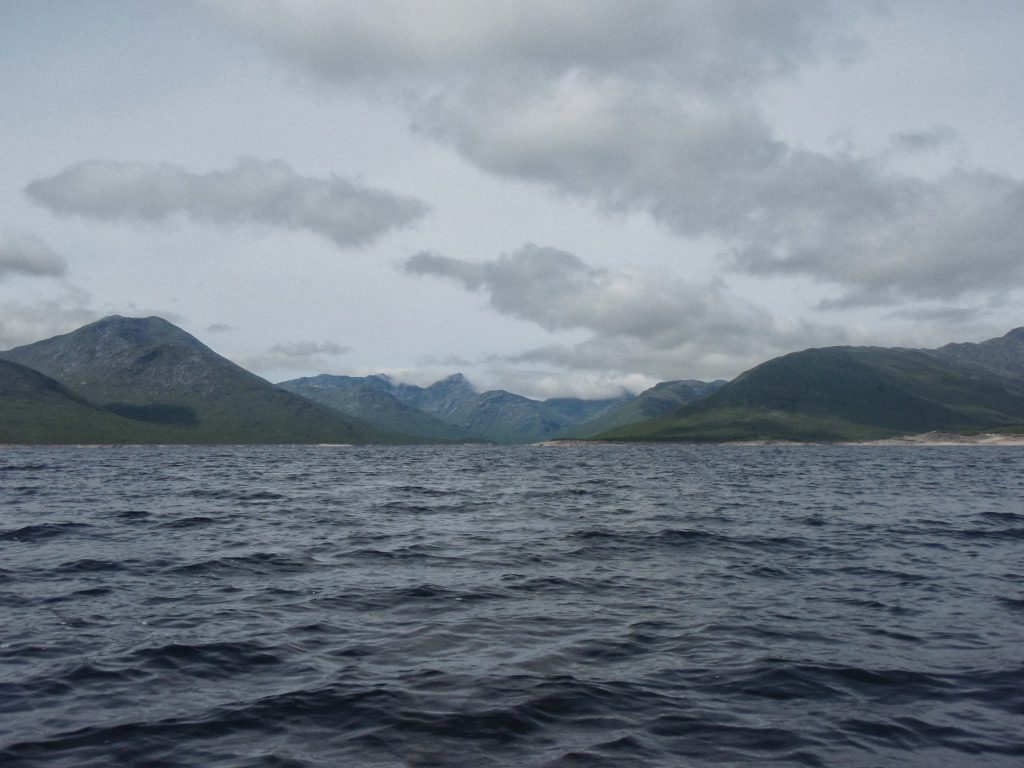 24 kilometres never really sounds like it’s that big a day when you’re sat with a brew in your hand looking at the map in a nice warm room, but the reality often is very different.

We set off at lunch time the day before our departure, with the plan to camp next to the cars before loading up our boats with our kit for the day and hit the water nice and early. We launched onto Loch Cuaich at 8 o’clock, after a breakfast of coffee and pancakes and started paddling east toward the dam that forms the first section of the Glen Garry hydroelectric network. The wind was perfect so rather than slogging we rafted up and threw up a sail to speed up our passage.

After a horrible slog around the dam we were glad that we had used the sail to speed things up. The Gearr Garry was very low, but Neil and I stayed optimistic about our journey. The river is only three kilometres long, so it should only have taken us about an hour before we reached the point where the Kingie joins and the river becomes the Kingie Pool. It didn’t. Almost 3 hours later, after a number of strops from Ellie, we eventually arrived in the Kingie Pool having poled our way down the shallow rapids, before giving up and dragging our boats through rough, tussocky ground for the final kilometre.

Kingie Pool is less of a small loch and more of a strange eddy with a large island, Eilean Dudh (the black island) in the centre of it. We knew that we had to stick to the right of the island as the left would have meant yet another portage round a small dam. Below the island we found our first major rapid of the day under the salmon catch, it was nothing too big or scary but enough to keen us on our toes.

The rapid flowed us onto Loch Poulary, a small loch with steep sides to our south. This steep bank was perfect to capture the wind again, and given that it was well past lunch time, we decided to raft up again and throw up the sail so we could journey and eat at the same time. Loch Poulary, much like Kingie Pool, has some flow to it so we were able to sit back and relax with the sail up, being pushed along and making up for lost time. As we approached the islands at the end of the loch, we found ourselves drifting towards a shingly class one rapid. Neil and Ellie were keen to take down the sail and dismantle the raft but I was quite happy that we could get down fine.

I may have been wrong. The raft spun and in the shallow shingly rapid we couldn’t get the purchase with our blades to turn back around. There was only one thing to do. I stood up and quickly pulled down the A frame and bundled everything into my boat as Neil and Ellie undid the raft just in time. There was a short 200 meter section of slow moving water before the bridge, and under the bridge was a horizon line.

As the most experienced boater in the group I went first, well aware that I was not at all set up. Sat on the rear seat of my boat with the sailing gear thrown loosely around my boat, I dropped into a large bouncy class 3 rapid. Without time to set up, or anything like a decent position to paddle from, my boat careered its own course down the rapid. The first wave crashed over my bow, filling the boat up to my knees with water. Immediately after this a stopper caught me, spun me round and dumped me upside down into the flow.

No problem, just another swim. Except I couldn’t swim. My legs were wrapped up in the tarp, string wrapping round my limbs. My head surfaced and I spotted my helmet floating next to me, I grabbed it and stuck it on my head so as not to lose it, before kicking my legs hard to get the tarp and string off me. I reached down and grabbed the thickest line around my legs and started to swim to the side, luckily this was my painter, meaning I was able to drag my boat with me to the side.

Amazingly all I lost in that scary swim was a bag of spare carabiners.

Ellie and Neil joined me at the bottom of the rapid, where we regrouped and sorted our kit out ready to continue our journey down the final six kilometres on River Garry and Loch Garry to our cars. The rest of the river was made up of simple flows with the odd class one. With the low water levels this would take us a couple of hours to get down onto the loch. Having only planned on being out for the day we were all starting to get hungry as the light started to fade.

As dusk fell we saw the bridge in the distance where the cars were. Ellie was starting to lag by this point, so we tandem up and finish the final kilometre towing her boat. Once back at the car it was time to wrap up warm and get the stoves on and some food down us. It may have been a much longer day than planned, but it had been an epic adventure in a stunning place.