A wet and salty adventure

A wet and salty adventure 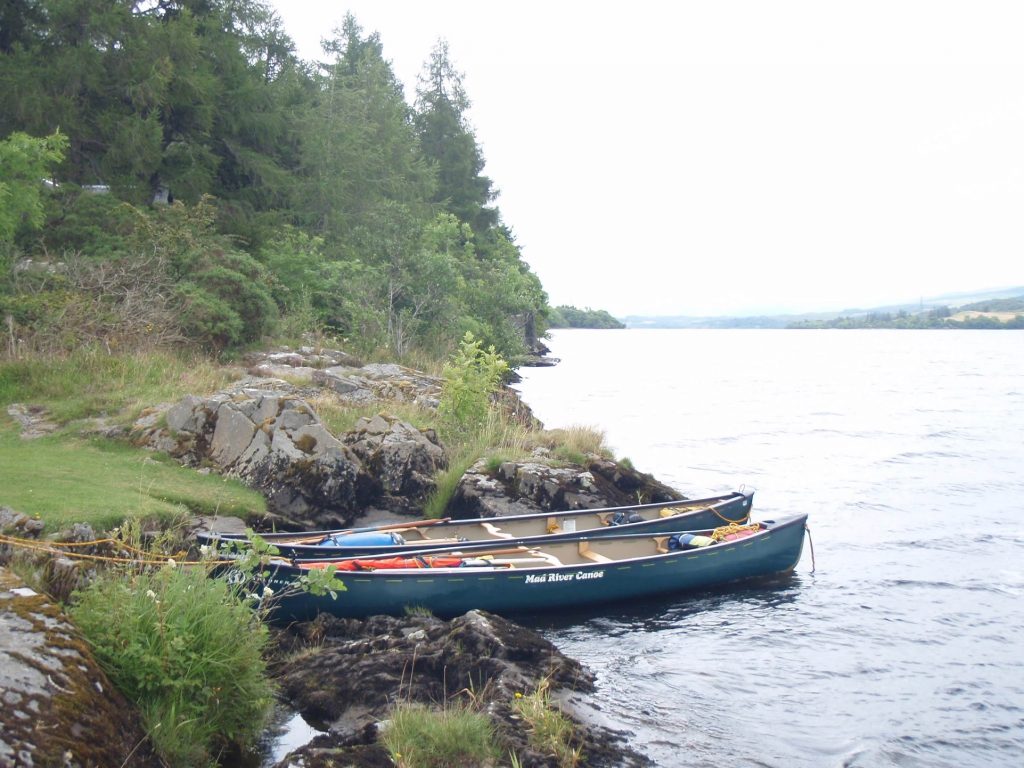 As an adventure sports coach you meet hundreds of groups of people that you get to take on epic adventures, sometimes those groups are super memorable and sometimes it’s the journey. In this case it was both.

It’s early August 2013 and Moose and I are about to meet our group, the team of 12 young people from Harrogate in Yorkshire that have traveled to Scotland to complete a week of canoe training on their path to complete their DofE Silver Expedition.

The plan was to spend a couple of days on Loch Goil covering basic paddling skills and rescues before heading out on a three day, two night expedition starting on Loch Eck and finishing back on Loch Goil.

During the two days training in the late summer sunshine we got to learn that our team was brilliant! Often young people can be pretty run of the mill and have very little credible banter but all of this team were great, not only having great banter with each other but also with Moose and I as well as the other staff at the centre.

So we loaded up the van and trailer with everything we needed for the 3 day trip and headed off for Loch Eck. Barry, our centre maintenance man, would lead the convoy in the minibus with the group followed by myself and Moose in the truck with the trailer. Like all good convoys, we checked before leaving that Barry was absolutely sure of where we were off to. Living in the remote parts of Argyll, with single track roads we knew that we were likely to get separated, which we did. As Moose and I were flying along one of the few main roads in the area trying to catch up with Bazza, we rounded a bend to find our group, stood in the middle of the road unloading the minibus. Perhaps Bazza’s understanding of where we were going wasn’t quite as good as he let on. After slamming breaks, throwing anchors out the windows and a lot of good quality loud swearing we stopped in the sketchy lay-by without killing any of the group. Well done us!

Loch Eck is a stunning 10km long loch that today was like a mirror. Moose and I were able to sit back and let the team cover the distance to the campsite at the far end with minimal issue. After arriving in camp normal routine kicked in and after the team were settled in and eating dinner Moose turned to me with a fantastic idea.

“You know the pub really isn’t that far away on the other side of the Loch” he says.

“Yea man. Plus they have the spot and our contact number.”

So off to the pub we went.

On the way to the boats Harry, one of the team asks “where are you two off to?”

“Ah we don’t get that much alone time from our girlfriends these days, so we’re off to have some bromance fun time in the woods! Back soon,” is the response we give as we jump in our boats to the shocked faces of the team.

The following morning, after a great sleep on full bellies of fish & chips and a cheeky pint, we hop on the River Eachaig which takes us down to the sea. The river isn’t hard but the first couple of kilometres has minimal eddies down and is over grown during the summer with rhododendron bushes so our full attentions were needed to ensure our team made it safely down the river. After Uig Hall the river mellows and starts to flow through open forested areas down to the Holy Loch, on this section we were able to give the team a bit more freedom, Moose even decided that it was the right time to put his paddle away and get some poling practice in.

It’s well known in the canoe world that there are two types of people when it comes to polling, those who have fallen in and liars! On this day Moose made it into the first camp. It was one of the best things I’ve seen paddling in a long time, paddling along chatting to some of the team to hear “ah fuck” from just behind me, I spun round to see Moose pole in hand one end planted in the ground and the other end in a tree. A kind and supportive friend would have informed him to let go of the pole, but I am not. I pissed my pants laughing as he gripped his pole for dear life as his boat continued floating down stream, until he fell out of it into the river.

I’d love to tell you that it was only me that laughed at him but by now all 12 of our clients have stopped to watch and laugh, at least some of them helped him recover his boat! If only that was the worst thing that would happen that day.

The Holy Loch is one of the many sea lochs of the Clyde estuary, on its banks there are a number of small villages, protected from the sea by some nice, high Victorian built sea walls. As we left the river onto the loch we noticed the headwind we were expecting was slightly more than forecast, we chatted with the team and came up with the plan to stick to the northern shore and meet on the headland 3kms way where the loch joined Loch Long, staying nice and close together throughout.

The first kilometre goes well the team are perfect keeping nice and close together and supporting each other as we creep along the shore, the wind starts to swing from a head wind to coming over our right shoulders pushing us onto the shore, so after a quick chat we move out slightly to ensure we’re not crashing up against the wall every couple of minutes. We’re about 50 meters out off the shore to avoid the wall when the wind ramps up a notch. With the wind comes the waves. They are massive. We watch an open boat crash hard down into the trough of a wave, taking on water as they go, we’re sure they are going to swim only to watch the water spill out of the back of the boat as they climb the next peak.

Just in case we weren’t on edge enough the team had another trick up their sleeve. The slowest boat that had spent the day mainly chatting and relaxing had started to fall back slightly, I shouted to Moose that I would drop back and chivvy them along, just as I went to do so I witnessed one of the most amazing, and scariest, moments of my paddling career. The boat was on the it’s way up from towards the peak of the wave when the crew decided that it had all got too much and grabbed the gunwale. All experienced boaters know that this is a poor life choice but these novices knew no better. As I accelerated to go and pick up the pieces before they crashed against the wall and died, the magic happened. The boat spun on the peak of the wave and then accelerated down the face, surfing perfectly along on the wave. At the same time the shouts of “PADDLE PADDLE PADDLE” came from both directions as Moose had also witnessed this magical moment and we both were screaming at the team. The dual command seemed to do the trick; they both grabbed their paddles and powered out and onwards towards safety.

Amazingly we made it through the loch to the safety of loch long with no capsizes, despite the 3 meter high waves.

Normally Loch Long in a southerly wind, with meter high waves isn’t the type of place I’d like to take a group of novice boaters but now we have navigated the Holy Loch it seemed like a breeze, literally. We pulled the boats together, rafted up and threw up a sailing rig to make our way the eight kilometres to Ardentinny. Normally this trip would take a couple of hours but in 45 minutes Moose and I were screaming along with our solo sails up following the big raft into the village.

We were met by an odd sight as we came along the front of the village aiming for the camp. We spotted a lady in her front room in her dressing gown waving like a lunatic at us, we politely waved back, and continued chatting to each other about what a strange situation it was. We arrived at camp and totally wiped out. We set up our hammocks before helping the team with their tents and stoves and food. After the team sat down to eat we set about making our own food under our tarp when a very shiny BMW SUV pulled up with the dressing gown lady driving. “Hi boys, I love canoeists! If you want you can both jump in and come back to mine for a shower if you’d like?” This offer was met with a confused silence from us. Neither of us were quite sure what to do or say in this situation, it felt very much like the start of a very niche porno. We joked with her that if it wasn’t for the fact that neither of us were single or not totally wiped out from such a challenging day our responses may have taken up the offer of a shower, but the reality was we were very worried that we might have found ourselves chained up in a basement.

You’re probably wondering how the trip could get any weirder and the good news is it didn’t. In fact day three was dull. We set off with a very tired group early in the morning and paddled slowly into Loch Goil and back to the base.

Later that day we sat in our staff debrief and told this story to the rest of the team, and we’re still to this day not sure that they really believe it all. But it happened.

Still to this day we’ve not returned to do that trip… and after that one time we’re not sure we ever will!