Where on earth is Inverpolly?

Where on earth is Inverpolly? 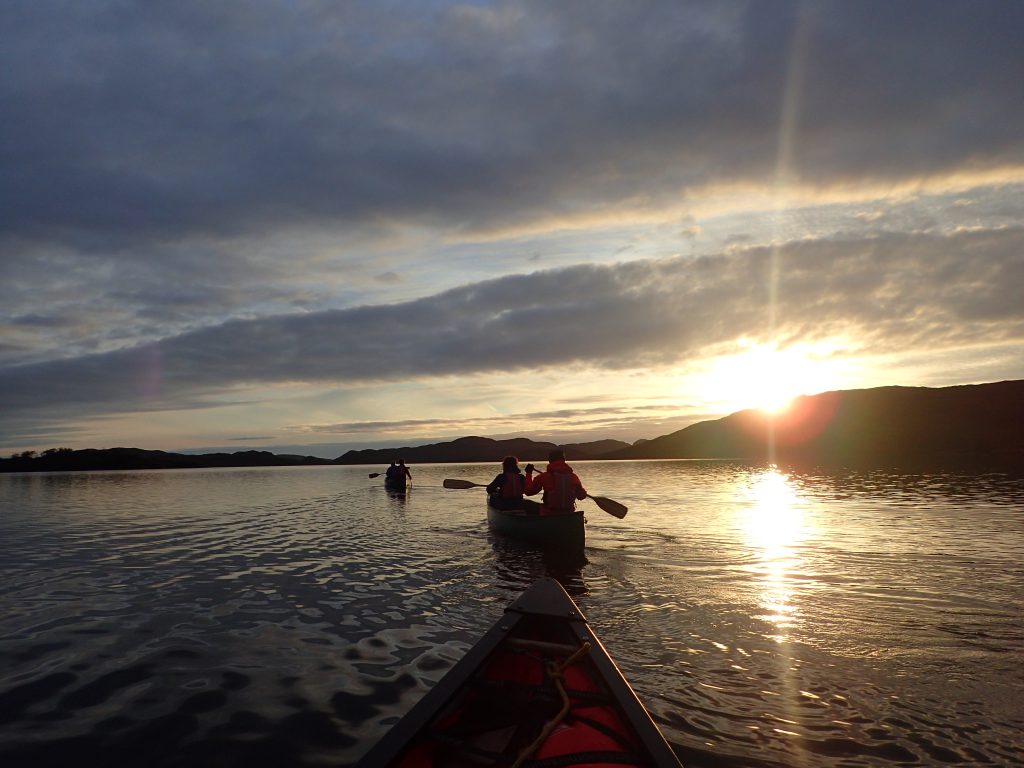 I was making plans for my time off in August, when Moose rang me out of the blue to tell me there was one space left on a canoe trip he was leading for Beyond Adventure in the north-west highlands, a seven day trip. “Sweet, perfect, count me in,” I say, with no knowledge of what the north-west highlands look like or what the trip really involved. All I knew was that I really wanted to see more of Scotland and figured what’s the worst that can happen? I knew I would be in safe hands and my approach to life is to give stuff a go and worry about it afterwards.

Just after I put the phone down, I start to think about the trip. I’m bloody excited but also why have I agreed to go camping? I have only camped once, and it was the worst experience of my life in a friend’s back garden when I was 14. I remembered being freezing cold and hardly sleeping, it was terrible. Now I’ve signed up for seven days of it! I had so many questions which I missed in the excitement of the phone call. I phone Moose back. Do I need a tent? A rucksack? A sleeping bag? Walking boots? What about going to the toilet in the woods?  All these questions seem really obvious looking back, but at the time there was so much going through my head that I couldn’t think straight. I start to question my decision, and in a haze of emotions I consider saying that I can’t go, but instead I choose to pull on my big girl pants and work out getting to Scotland. I wanted to see the highlands and I was going to have to learn to camp at some point, how better than committing for seven days?

I arrived in Scotland and found out that Moose, Grant and Ellie were about to go on another Beyond Adventure trip to the Great Glen. Moose was paddling, Grant and Ellie were assessing the groups, so were driving around, but camping. “Sod it, I’ll join them,” I thought. Another three nights of camping. I had no idea how to put the tent up, and Moose had to show me a few times before it made sense, but after a couple of nights I was getting the hang of it. I was even super warm in a big arctic Haglofs sleeping bag and it wasn’t too uncomfortable. But it rained. It rained loads one of the nights and I hardly slept, it sounded like it was going to come through the top and I was worried everything was going to get really wet. But I survived and was ready for a bigger trip.

We drove through Inverness where we picked up the rest of the group and drove to Ullapool, then Loch Sionascaig. It was like being in a whole new world. It was super windy and so we walked up Stac Pollaidh, getting to know each other. From the top, we could see all the way over Loch Sionascaig and out to the sea. I was amazed! I could see loads of beautiful beaches and so many incredible pockets of water and majestic mountains almost as far as I could see. I could hardly believe that I would be paddling on there tomorrow and when Grant and Moose told us we would be camping on one of the islands I could hardly contain myself. I work in childcare and my imagination is really overactive sometimes, I felt like a pirate going on a quest, and I wanted it to be tomorrow!

I felt like I was becoming a camping expert now, and the windy night at the campsite was nothing to me. I managed, for the first time, to put up the tent on my own while it was trying to carry me around the site. I sat looking out over the Summer Isles, feeling really proud of myself and how far I had already come in a week.

The next day we stood outside the van looking at the amount of kit we would have to take on the water with us. There was loads! I couldn’t believe it would all fit in the boats. We carried it all down to Loch Buine Moire and got on the water. We were getting eaten alive by my new friend, the Scottish midge, what a delight. I was stoked to be on the adventure though and couldn’t wait to see what would happen next. We finally got on the water and out of the midge. As much as I had enjoyed the challenge of the portage, it was nice to finally be canoeing. I was in a boat with Aubrey, an older guy from Canada who had loads of experience in a canoe. He shouted instructions to me and we really got to grips with paddling as a pair. We were moving so quickly that we had to wait for the others quite a lot.

We were only on Loch Buine Moire for a short while to get used to paddling, then we got to the end and portaged again over to Loch Sionascaig. I was feeling good after we smashed the first portage and this wasn’t going to take long, and lunch wasn’t far away. We started carrying boats in fours, but this portage was very different to the first one. It was only three hundred metres long, but the ground was boggy and knee deep for most people, but being so small it was almost up to my waist! The midge were back in full force, biting away at us and testing everyone’s patience. I was swimming my way across the portage and climbing over hills and lumpy ground. It was really hard work and everyone was really pleased when we got the last few bits over to the small beach and Moose and Grant had lunch set up on top of an upside down canoe.

Sat on a little beach the shores of Loch Sionascaig, we had a feast of lunch including the one and only scottish oat cake, cheese, pickles, meats, olives and cake to finish. I was happy as a pig in shit and was hungry for more of this adventure. We packed away lunch and hopped back onto the water, leaving Boat Bay out onto the main loch. We passed many islands covered in birch woodland and heather, with white sandy beaches, almost unbelievable that they were here. I looked up to the sandy peak of Stac Pollaidh, and it was great seeing it from here having been up there the day before. We paddled around for about two hours and arrived at our campsite, a small island in the shape of a horseshoe. I set myself up in a small spot on top of a hillock, away from everyone else, looking over a little beach and out onto the loch. I sat in the entrance to my tent, looking out and listening to the water running over the rocks. It was bliss.

We had a very Scottish dinner of haggis, neeps and tatties and went to sleep, surrounded by silence. It was the best night sleep I have ever had and I slept with a big smile on my face. We used the island as our base for the next few days, paddling around Loch Sionascaig and walking on the mountains. Coming back to the island every night was amazing, and we spent the nights chatting with each other, swimming in the freezing cold loch for a wash and one evening we went for a sunset paddle. The water was so calm and as it got darker, the moon was reflected on the water, it also got us away from the midgies.

I was sad to leave the island when we finally had to pack up, it had become my home and I was happier sitting in my tent than anywhere else in the world. We paddled back to boat bay and hauled everything back to the van. The trip ended up in a luxury bed and breakfast back in Ullapool, where we finally had a much needed shower and said goodbye to the friends we had made on the trip. I didn’t really want to go home, I had overcome so many fears, I had learned to put up a tent, carried boats, put up with midges and learned to shit in the woods. About eighty per-cent of the trip had been out of my comfort zone, but camping was now my thing and I wanted to explore more and spend every night in a tent, I had discovered my explorer Betty side.

Pint sized Beth is a childcare practitioner from Knutsford, but her love of the outdoor, particularly winter sports has her traveling the world. Currently she’s living and working in Rossland, BC